“Never doubt that a small group of thoughtful, committed citizens can change the world; indeed, it’s the only thing that ever has.” – Margaret Mead

We’re all familiar with major names in philanthropic giving like MacArthur, Rockefeller or Ford, but there are hundreds of lesser known foundations that are making innovative solutions a reality through small-scale funding programs. One of these is Invoking the Pause (ITP), an organization focused on implementing tangible trailblazing climate solutions in the 21st century.  In their own words, they “use small grants to fund strategic ‘pauses’ to help innovators refresh and renew their thinking on climate challenges.”

The Optimist Daily is a proud recipient of an Invoking the Pause grant, and working closely with ITP’s organizers and other grantees has opened our eyes to the true power of seed funding for outside-the-box thinkers in sparking systemic global change. Through the process, we’ve had the pleasure of learning about other organizations addressing climate issues with creative initiatives, so today we’re highlighting some of our fellow grant recipients and the impressive work they’re pioneering. 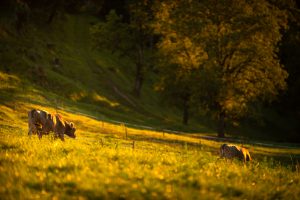 We can’t discuss comprehensive climate action without taking our food systems into account. Our modern agricultural industry is unsustainable and practices like chemical fertilization, monocrop planting, and aggressive tilling are slowly draining our soil of nutrients and inhibiting their ability to hold carbon. Regenerative agriculture aims to revolutionize cultivation to make crops more sustainable and nutritious, but initial funding is required to encourage farms to adopt regenerative practices like crop rotation, cover planting, and organic cultivation. This is where Zero Foodprint comes in.

Started by Anthony Myint and Karen Leibowitz, Zero Foodprint is based on what they call a “table-to-farm” model. The organization takes a few cents from participating restaurants’ meals and uses them to fund regenerative agriculture grants for farms.

Since 2016, Zero Foodprint has awarded $325,000 in grants to 18 carbon farming projects to remove 7,000 tons of carbon from the atmosphere. Although grants got them started, Myint emphasizes that their work is not charity, but rather a tactical solution for moving the food system towards a greener future: “This is a systematic approach to improve land stewardship.”

When we think of a green future, the first thing to come to mind for many of us is renewable energy.

Renewable energy sources are a requirement for powering our world without harmful greenhouse gas emissions, but the adoption of green energy infrastructure has largely been isolated to wealthy, white communities, neglecting those who have already been most negatively impacted by fossil fuel pollution.

The American Resilience Project, founded by Roger Sorkin, aims to create a more equitable green future by uplifting voices and discussion from diverse communities about “climate change and what it means for security and the future of our country and world,”using film as a storytelling medium to share the experiences of those on the ground facing the climate challenge head on.

Their most recent film, the fascinating Current Revolution: Nation in Transition, explores the coal-to-renewables transition occurring in the Navajo Nation, specifically in Northern Arizona. The film tells the stories of workers, their families and communities, business and tribal leaders, utility executives, policy makers, and environmental activists, and offers a road-map to a just energy transition that leaves no one behind.

Among the many people interviewed are the leaders of Native Renewables, a solar energy company whose goal is to provide renewable energy to every home in the Navajo Nation using off the grid solutions. Native Renewables is a female-led organization and they facilitate localized solar to help bring reliable, affordable, sustainable energy to Navajo homes. For residents, the investment in solar eventually pays for itself, and families can even band together to create larger, communal installations that reduce overall costs.

The American Resilience Project recognizes that a big hurdle in building a more sustainable world is raising awareness about the feasibility of environmental solutions and the impact they can have on some of the world’s most vulnerable populations. In GreenBiz, Paul Hirt, Professor of History and Sustainability Arizona State University, and Sorkin write, “To successfully adapt during this time of rapid change, business leaders must boldly experiment and innovate, embrace — not resist — change, and think broadly about the human dimensions of the energy transition rather than focusing just on technology and markets.”

Invoking the Pause looks at climate solutions which strive to make the world a better place not only for humans, but also for the natural 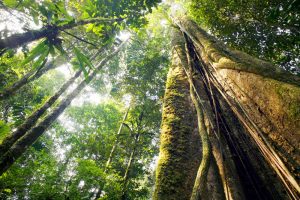 creatures which roam our earth. One ITP grantee looking specifically at the animal kingdom is Rainforest Connection. Started by engineer and National Geographic explorer Topher White, this project creates a digital library of rainforest audio to monitor illegal logging and detect poaching activity.

To collect the recordings, White’s team uses recycled cell phones in real-time across 20 countries. Anyone from park rangers to scientists to any curious listener can access the recordings through the company’s website and app.

Rainforest Connection’s data is freely shared with other researchers to encourage more scientists to contribute their recordings to the collection. In White’s own words, “This is possibly the most important moment for people to be gathering extraordinary multitudes of data with as great detail as possible… It’ll all be gone if we don’t capture it now.”

The question of what role private enterprise should play in climate action and social justice can be a confusing one. Many forward thinking economists know that economic prosperity, equality, and sustainability can coexist and thrive simultaneously. ITP partner As You Sow understands the relationship between private industry and sustainability and is a leader in empowering shareholders to change corporations for good. As You Sow’s CEO, Andy Behar explains, “We believe that data drives decisions.” Towards that end, they work to bring transparency and accountability into corporate boardrooms and from there into the world. Their goal is to convince at least 100 of the S&P 500 companies to formally adopt their Say on Climate plan by 2022.

On the social justice front, Olivia Knight, As You Sow’s racial justice initiative coordinator, works to ensure that companies follow through on social justice pledges and ensure “that People of Color are hired, paid, promoted, and retained equitably is less so.”

To learn more about As You Sow, check out our Optimist Daily Update interview with Olivia Knight.

These are just a few of the many great organizations ITP supports. If you missed our own ITP funded projects on emotional inflammation and climate anxiety, it’s not too late to check them out! These webinars are a collaboration between The Optimist Daily, PsychAlive, and the World Business Academy which aim to address the mental health implications of the climate crisis with tangible solutions for addressing the stress we experience in the face of the climate crisis. 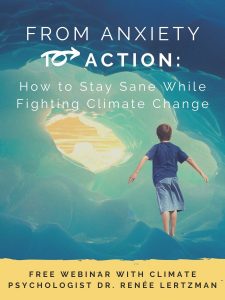 The first, found here, is a discussion with Dr. Renée Lertzman entitled “From Anxiety to Action: How to Stay Sane While Fighting Climate Change.” The webinar offers a toolkit of resources, practices, and mindsets with which viewers are able to better understand their own mental health as it relates to climate anxiety so that they are able to become effective change-makers in their own lives and on a larger scale.

The second, found here, is through a discussion with authors Dr. Lise Van Susteren and Stacey Colino, centered around their book, Emotional Inflammation: Discover Your Triggers and Reclaim Your Equilibrium During Anxious Times. One of the main causes of emotional inflammation is our sense that the big issues—like climate change, gun violence, and political corruption—are beyond our control. With strategies for relieving stress, improving critical thinking, recovering inner composure, and reclaiming the gifts of nature, this webinar teaches you to transform your distress into steady calm and strength.

Harvard University researcher and now professor Erica Chenoweth was studying nonviolent movements around the world when she established what she dubbed the “3.5 percent rule.” In research conducted with collaborator Maria Stephan of the International Center of Nonviolent Conflict, she realized that it took a surprisingly small margin of engagement to make revolutionary movements successful. Looking at social movements from 1900 to 2006, Chenoweth and her team uncovered a trend where movements in which at least 3.5 percent of the population were actively engaged were bound to succeed.

Climate change is a monumental challenge, but as history would indicate, if we can get just 3.5 percent of the world actively engaged in reversing our climate course, we stand a chance of saving ourselves and this beautiful planet we call home. Small non-profits and grant providers like Invoking the Pause are crucial to meeting our 3.5 percent climate threshold by providing funding to implement solutions and prompt more people to become climate actors. “I am so proud of our ITP Grant Partners, who are creating powerful systemic impacts in many climate challenge areas,” says ITP founder Maggie Kaplan. “Although we may be a small non-profit, we’re having an outsized impact that is creating truly an “exponential return” on our many various climate grant investments!”

Cooling bamboo system is a green alternative to air conditioning

We love sharing the uncovering of the vast biodiversity of our world with our readers. In 2020 alone, 503 new animal species were discovered. From the Popa langur monkey, to nine new snake species and ... Read More

Gene-therapy could treat leading cause of blindness

Throughout the past decade, it seems like science is getting closer to the reality of gene therapy. Here at The Optimist Daily, we’ve reported on a number of potential uses for the practice, including; curing ... Read More

Could electric rail vehicles be the future of freight?

According to the Environmental Protection Agency, medium- and heavy-duty trucks are responsible for 24 percent of the total greenhouse gas emissions spewed by the transportation industry in the US. A team of former SpaceX engineers ... Read More

Believe it or not, scientists have been levitating water since the 18th century. The Leidenfrost effect was first described in 1751 by a German doctor and theologian, who named the phenomenon after himself. Using a ... Read More

Goldie the porcupine pufferfish is thriving after emergency dental work

Did you know that porcupine pufferfish teeth, which are known as beaks, never stop growing throughout the fish’s life? “They’re usually kept short naturally, as they’re worn down on their regular diet of hard-shelled foods,” ... Read More

The psychological reason we’re so taken with Wordle