“Neither cities nor places in them are unordered, unplanned; the question is only whose order, whose planning, for what purpose?” – Peter Marcuse

If you stand outside in the heat of summer, you’ll notice that things are considerably less comfortable on concrete or asphalt than on grass or even dirt. Man-made infrastructure including roads, sidewalks, and buildings absorb and re-emit the sun’s rays more than ​​natural landscapes such as forests, parks, or bodies of water, leading to what is known as the “heat island effect.” This effect describes how urban areas with high concentrations of development and low concentrations of natural landscapes collectively absorb more heat, leading to them being several degrees hotter than their more rural surrounding areas both during the day and at night.

This phenomenon is widely acknowledged, especially by those who suffer through hot city summers, but more recently, researchers have turned their attention to the heat disparities that exist within cities, even just from neighborhood to neighborhood. 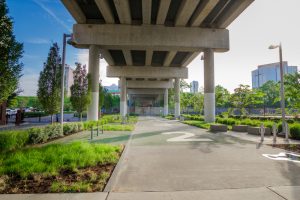 The National Oceanic and Atmospheric Administration (NOAA) launched the National Integrated Heat Health Information System (NIHHIS) this summer in an attempt to understand how temperatures vary within an urban area. They spent summer 2021 mapping heat disparities across 11 cities to better understand how these differences impact current residents and will be further exacerbated by climate change. They found that within the same city, some neighborhoods can be up to 20 degrees hotter than others. Why? Urban green space.

So we know that areas of a city without greenspace are hotter than their plant-filled counterparts, but what causes this disparity in the first place? “If you look at a map of most American cities, you’ll find that tree canopy cover tracks along income lines,” says Sarah Anderson from the nonprofit American Forests. “Wealthier communities have more trees and lower-income communities have fewer trees. And this is the result of decades of discriminatory housing and planning purposes.”

These discriminatory housing policies include “redlining”, the process in which the Home Owners’ Loan Corporation (HOLC) historically rated areas in terms of loan eligibility. In the late 1930s, the HOLC “graded” neighborhoods, placing them into four categories based on “loan worthiness”, which was largely determined by the racial makeup of these neighborhoods. Neighborhoods with high proportions of residents of color were marked with red as “high risk” for loans. The result is that communities of color were excluded from economic opportunities and neglected when it came to infrastructure spending—like installing parks and planting trees.

According to a recent nationwide study, “94 percent of formerly redlined areas, which remain mostly lower income communities of color, are exposed to higher temperatures than non-redlined, affluent areas.”

Mapping out heat disparity is a critical first step to determine which neighborhoods are most vulnerable to climate-fueled heat waves, but the next step is addressing the issue with green space planting. American Forests hopes to help bridge this greenery gap.

As part of its mission to promote social justice, the nonprofit is working on tree equity not only to cool things down, but also to help clean the air, lower air-conditioning bills, reduce flooding, and improve mental health—more on this later.

The nonprofit has recently partnered with the company Tazo Tea to create the “Tazo Tree Corps” to plant and care for trees in targeted neighborhoods in Detroit, Minneapolis, the Bronx, California’s Bay Area, and Richmond, Virginia.

“We’re working to employ folks from these communities — folks who are Black, Indigenous, and people of color — who bear the brunt of a lot of the challenges that come with climate change,” says Anderson, who serves as the director of career pathways at the organization.

After a couple of weeks of training, participants in the program have the possibility to transition 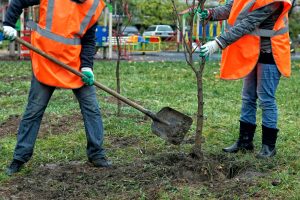 into full-time employment. And the jobs also come with support like subsidies for transit and childcare. In the long run, Anderson says, it can also lead to careers.

“About a quarter of tree trimmers are self-employed in three years,” she says. “So there’s a real wealth-building opportunity here as well, not just environmental justice and climate justice, but economic justice as well.”

Like many issues we address on The Optimist Daily, the issue of urban heat disparities is multifaceted. It’s not just an issue of warmer temperatures and fewer trees, but more broadly, it’s a manifestation of the discrimination, lack of funding, and resulting poor health outcomes that low-income neighborhoods have always faced.

A 2014 study points out that low income neighborhoods are not only more at-risk for higher heat wave temperatures, but they are also more vulnerable to these high temperatures due to a variety of factors. The researchers summarize: “Occupation is directly associated with risk of heat-related health effects, but associations with race, education and income are likely mediated by characteristics such as use of air conditioning or cool environments, comorbidities, medication use and urban heat island effects.”

As the connection between urban green space and health outcomes becomes clearer, some city and local governments are taking action on this issue. Richmond, Virginia, one of the cities analyzed by the NIHHIS project, used data from the heat island campaign to turn city-owned land into new community green spaces where it would be most influential.

In addition to establishing more green space, some cities are making room for planting by removing another wealth-impacted element of infrastructure: highways. 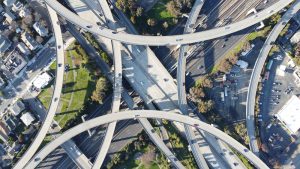 Many urban highways from the 1950s and 1960s were deliberately built through neighborhoods primarily occupied by people of color, effectively walling these families off from economic opportunity and disrupting their sense of community. Urban planning and public policy researchers Julian Agyeman and Joan Fitzgerald explain in a recent article how allocating part of the new $1.2 trillion infrastructure bill to redirecting these roadways could play a big role in reversing systematic discrimination in these communities.

These discriminatory highways are commonly found in areas like West Bellfort in Houston, Westside in San Antonio, and West Oakland, California. The introduction of redlining was quickly followed by the first federal highway law in 1956 which used highways to cut off or destroy primarily Black neighborhoods.

By engaging in what environmental justice scholar Robert Bullard calls “transportation racism,” these policies have led to high levels of air pollution in communities of color as well as less tree cover and a higher likelihood that these areas are chosen for further damaging infrastructures like industrial facilities and incinerators.

All of these factors contribute to what Harvard researchers have deemed the “Delmar Divide.” Looking specifically at Delmar Boulevard in St. Louis, the researchers concluded that ZIP code is a more accurate determinant of lifespan than genetic code.

So how do we fix this? Many of the highways included in the original 1950s schemes are now deteriorating. 28 cities have already begun or plan to remove these racist highways, and further redirection of roads, combined with other infrastructure investments, could serve as an act of restorative justice for these marginalized areas.

An example of the efficacy of highway removal and relocation can be seen in Rochester, New York. When the city removed the Inner Loop East, which isolated the city’s downtown, walking and biking increased 50 and 60 percent respectively in the area. Developers have also come in to offer more affordable housing options in the city and the $22 million in public funds that supported the project, in turn, generated $229 million in economic development.

Removing these dilapidated highways and replacing them with green spaces would be a two-factor strategy for improving health outcomes and reducing heat in marginalized neighborhoods.

Heat isn’t the only threat to city-dwellers in a changing climate. As this summer’s hurricanes and storms have demonstrated, flooding is another primary concern. Green spaces absorb heat, but they also absorb moisture. When heavy rainfall hits a city, areas with lots of greenspace fare better as those areas help suck up the excessive moisture.

Following Hurricane Sandy in 2012, Houston, Texas created 150 miles of trails, parks, and green spaces along the region’s bayous to prevent flooding during extreme weather. Although Hurricane Harvey was still devastating for the areas, these green spaces helped mitigate what could have been an even worse disaster.

Some neighborhoods don’t have available space for urban greenery, but that doesn’t mean they 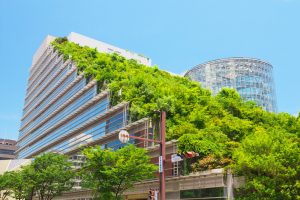 can’t get creative. A New Zealand study found that buildings with green roofs retained 56 percent more rainfall than a conventional roof and their peak runoff levels during storm surges decreased by 62-90 percent.

Even in drought-stricken Southern California, the cities of Ventura and Los Angeles have planted bioswales, sections of vegetation which work to capture and clean rainwater. These patches aren’t necessarily aimed at flooding, but rather retaining and purifying the region’s precious rainfall as well while cooling down surrounding neighborhoods.

The good of green

Green space is powerful in urban areas. Being around trees has been shown to boost children’s cognitive development and time in nature improves mental health. One study showed that just listening to nature is good for your health.

Plus, it’s great for the non-human denizens of our cities too, creating habitats for birds, bees, squirrels, and insects which all contribute to the healthy biosphere. What’s more, when this green space takes the form of urban gardens, it can help boost nutrition outcomes and connect residents with fresh produce in food deserts. Urban green space adds to local resilience alongside personal and community dimensions too numerous to list.

Reversing decades of discriminatory urban planning policy in the face of a rapidly changing climate is no easy feat, but increasing urban greenspaces is an easy and fairly affordable solution for equalizing health outcomes and living conditions across cities.

A new policy from the Food and Drug Administration (FDA) plans to make hearing aids more accessible and affordable in the US. The new policy will make hearing devices available over-the-counter as early as next ... Read More

For decades, the population of the great Pacific leatherback turtle off the California coast has declined by 5.6 percent per year. To address this devastating loss, California’s Fish and Game Commission recently voted to list ... Read More

As conditions in Kabul continue to worsen due to the Taliban takeover, residents of the Afghan capital have been struggling to get accurate real-time information about what’s happening in the city. Three and a half ... Read More

With our current knowledge of how temperature works there is no upper limit, this means materials can keep getting hotter and hotter to no end. This is not the case for lower temperatures, with the ... Read More

The scientific power of live music

We’re all familiar with the sense of wonder and joy we experience when we hear a song or piece of music we love, but there’s something even more magical about hearing that song performed live. ... Read More

Finding the right oil for your diet is a crucial part of maintaining your health—and is especially important for those who stick to a vegan diet. To minimize some of the confusion you may face ... Read More

Nadya Okamoto creates a tampon that actually mirrors the ...