“It’s precisely because we’re finite that life is so sweet.” – Sheldon Solomon

Last month I got the opportunity to meet Ady Barkan, a progressive activist who’s become one of the most powerful voices in the fight to move the United States to a universal healthcare system, sometimes dubbed “Medicare for All”.  The meeting took place at an event showcasing Barkan’s latest campaign, “Un-Covered: Healthcare Conversations with Ady Barkan” – short videos of people sharing their healthcare stories, and others where Barkan interviews the leading Democratic presidential candidates on their views around healthcare.

The thing about Ady Barkan is in addition to being dubbed “the most powerful activist alive” by Politico, he is also living with ALS.  Diagnosed in 2016, he has been progressively losing control of his body.  He can no longer walk or lift his arms, so he navigates the world in a motorized chair.  He can no longer speak in his natural voice, so he communicates through a voice box. He no longer breathes on his own.

Yet in his disability, his humanity is more present than ever.  When he talks to these politicians, they are forced to confront their own mortality as well. Anything less than a personal human response was almost painful to watch, and it underscored the incredible power of Ady Barkan’s signature tactic of organizing policy changes: Bringing a human face to the policy in question – whether monetary policy or healthcare – decisions made by our leaders and society’s decision-makers have human costs or human wins.  It’s not just about the money.

Imagining what I would write about this interaction with Ady Barkan, I struggled between two separate topics related to him.  One would be a piece on the urgent need and moral obligation to create a system in the United States that made decent health care a universal human right and remove the profit-driven mentality from the entire healthcare industry.  The other would be a meditation on how this vigorous young man was given an unimaginably terrible diagnosis and found a way to transform his relationship to it to create a life of meaning and purpose, even as he dies.

I opted for the latter.

In a culture that has made illness, death and dying taboo subjects, we celebrate youth and vigor and feel shame about our impermanence.  We pretend that we might live forever, always seeking the next magic cure, while denying, or ignoring our mortality. Death and dying become unmentionable and even unthinkable.  We repress our fear and anxiety and act as if we might live forever. Seeking our own personal immortality projects – our children, our careers, our religious or national identity – and suppressing the certain knowledge that our time is short.

Perhaps, if we accepted and felt this truth, we would arrange our lives differently.  We might seek out only the most meaningful experiences, spend time on projects that matter to our deepest hearts, give kindness and be tender to the people we love.  We might decide to focus on what matters most to each of us, and avoid getting distracted by the rest. This was what Ady Barkan has done.

The lighter side of darkness

The only other true activist I’ve known in my life was a man named Fred Branfman.  He was a close friend to me and my extended group of friends during the last 16 years of his life.  I first got to know Fred in 1998, when he came to Santa Barbara seeking insight and connection in his quest to understand his own fear of death and dying, and as he began to articulate what he called “the gift of death awareness.”

In a January 2014 article, Fred wrote about how the gift of death awareness transformed his own life:

I discovered this truth, to my amazement, when my life was transformed by facing my own eventual death at age 48. When the death anxiety I had been repressing burst to the surface I discovered that facing it, though painful, released enormous energy, appreciation for the preciousness of life, deep reservoirs of feeling I never knew existed, and a deep desire to contribute to the wellbeing of those who would follow me. Indeed, the more emotional pain I was consciously willing to feel about my death, the more truly alive, loving, empathetic and appreciative I felt. It was almost mathematical: more pain, more life; more life, more pain.

Fred himself died of ALS in September of that year, but his energy still infects my thoughts to this day.  In encountering Ady Barkan, and reading his memoir about his own struggle with ALS and how he’s seeking meaning in it, I could not help but think of Fred.

Life-affirming death awareness.  That was Fred’s mission for the last 24 years of his life.  Though before this, he was an anti-war activist, the guy who exposed the United States’ pointless covert bombings of Laos in the 1960s and later worked on political action campaigns in California and the USA.  He had an epiphany in 1990, in the midst of one of his political roles. He woke up one day with the realization that death is real, and with the sense that the fear of death is hidden in the midst of everything that motivates people in their lives.

Soon afterward, Fred dropped out of politics, on a quest to understand the impulse to forget that we are mortal, and more importantly to seek out the people who had been reminded of their mortality – through a cancer diagnosis for example – and then reorganized their lives to suck up the most meaning and connect as deeply as possible to the people and the things that matter most to them.

In his quest, Fred encountered many who upon receiving a terminal diagnosis, upended mediocre lifestyles and lived as brilliantly as they could for as long as they had left.  In some cases, that was a long time. In others it was short. Many years or few, nearly every person who upon confronting their demise and embracing their life as fully as possible reported to Fred that the gift of the diagnosis was not one they would easily return.  The pain of facing death was worth their newfound attachment to life, and they would rather live the enriched short time they had than regain years upon years of a life half lived. In the face of death, they spent their time building better relationships, working on passion projects, or writing the book that has been waiting to be born.  In the face of death, they lived.

Eyes to the Wind

In Ady Barkan’s case, he has chosen to focus his remaining energy on things of utmost importance to him, and in fighting for others, to become a role model to his baby son.  He has also called on friends and family and gathered them close. In sharing his fear and horror at his situation, he has found tremendous support.

In his memoir, Barkan recounts a question that had been posed to him by his therapist early on with his diagnosis: What, if anything, might ALS give back?  At first, he struggled to answer, as he was only aware of losing so much. “Life and death were both moving quickly,” he writes, “and my daily existence was very different from what it had been only two months before.”

But as Barkan has continued to throw his body on the line in activism for healthcare, and against greed and inequality, he is creating more and more of an impact, and a better answer to the therapist’s question has crystalized.  More people are listening to his message. More are gathering around him to support his work. More are following his example, and standing up for what is right. In this newfound power, despite his physical weakness, Barkan is standing taller than ever.  He writes, “Precisely because my days were numbered, people drew inspiration from my decision to spend them in resistance. Precisely because I faced such obstacles, my comrades were moved by my message that struggle is never futile.”

ALS is a particularly terrible disease, and I am not sure I would be as courageous as Barkan has been in the face of it.  Nevertheless, he has found a way to transform the fear and the weakness into powerful action. He is a tremendous inspiration.

In reflecting on Ady Barkan’s life, and on Fred’s, the poetry of Mary Oliver keeps coming to mind, and I hear the final lines of The Summer Day in my mind’s ear:

Doesn’t everything die at last, and too soon?

Tell me, what is it you plan to do

with your one wild and precious life?

This is always the question isn’t it, though we forget it often enough.

The gift, however, of asking this question is in reminding us all that we are alive now.  We are here now together, and with our eyes to the wind, it’s time to stand up for what we believe in, and change the world together. 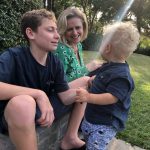 New York aims to ban the sale of all ...

Last week we shared how a controversial Robert E. Lee statue was finally removed from Virginia’s capital. In an acknowledgment ... Read More

After years of campaigning from green activists to stop grocers and large supermarkets alike from wrapping fresh produce in plastic ... Read More

Shoppers who visit the Madewell store in Brooklyn will find a surprise if they head up to the location’s second ... Read More

The pandemic has forced many of us to adjust to working remotely, which has its benefits, but also comes with ... Read More