“Never doubt that a small group of thoughtful committed citizens can change the world. Indeed, it is the only thing that ever has.” – Margaret Mead

Before the pandemic hit, Karin Muller had planned to roadtrip the United States to feature unsung heroes working in their communities. When her plans were put on halt, she became a local hero in her own community. Karin’s story is one of two featured in this week’s Optimist View showcasing the work of some of our most impactful Emissaries.

Throughout the pandemic, Karin has been visiting local homeless camps in the river bottoms of Ventura, California to prevent the pandemic from reaching their community by providing them with critical resources so they don’t have to risk exposing themselves to the virus.

A certified EMT, Karin started hiking into the river bottom daily to bring food and medical attention to those in need. She shared 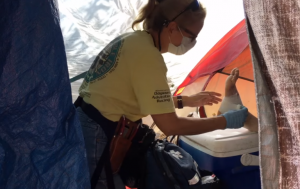 her project with other community members and soon had groups of volunteers clamoring to contribute. Equipped with baked goods and sandwiches from dedicated helpers, Karin quickly learned the intricacies of the river bottom community. In asking around to try and locate sick individuals, she realized that the network of the riverbottom was incredibly connected. “You don’t have to go to 300 people, you just have to go to the right 30 people,” she said.

What started as one woman’s mission organically turned into a larger community project. Rick Nack, a local engineer, showed up one day with a bag of oranges to contribute. Realizing the community had nowhere to wash their hands, he got to work building a handwashing station in the camp. 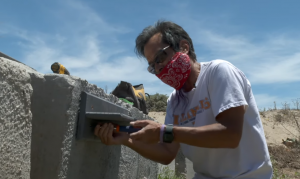 The needs of the homeless community go far beyond just food and medical resources. The more time Karin spent in the community, she realized other areas of support were badly needed: like financial resources. When residents started inquiring about the stimulus checks in late April, Karin recruited Jennifer Brynn, a local attorney who brought in a mobile hotspot, tablet, and financial expertise to connect residents with their stimulus checks.

The money from these stimulus checks has made a real difference for many community members. They’re using it to buy generators, fix up cars to get to work, and one resident even used the money to buy meals for the entire community on the Fourth of July. When Karin arrived, the residents had set up a socially distanced food distribution site to share the holiday with one another safely.

There are two predominant river bottom camps made up of about 250 people. The homeless community is full of kind and creative individuals, but understandably, they were not quick to open up. Karin says she visited the river bottom daily for about two weeks before she learned her way around and people started to warm up to her presence. Negative experiences with police combined with unfriendly locals who would prefer they move along makes them wary of outsiders, but within the camps, the community is close knit and vibrant. Karin has met musicians, carpenters, and artists who slowly welcomed her in.

Tapping into her experience as a filmmaker, Karin created a short video about the river bottom to share her work and the experience of these communities with the broader public.

When I asked how she pulled off the project, she said, “I wish I could say there was a formula. There isn’t. It’s just a matter of going in everyday for 5 or 6 hours and playing horseshoes and jamming and over time it grows.”

Active home chefs like retired teacher Terri Jenkins and retired nurse Kathleen Quick continue to make food for the community, and volunteers like Rick have taken on some of the daily delivery tasks to lighten Karin’s load, but as long as the pandemic remains a threat, Karin plans to keep the program active.

In addition to food, volunteers have expanded to meet the less obvious needs of residents as well. Karin is working with one resident named Rainbow to get period products to those in need. Karin delivers donated sanitary products to Rainbow and she ensures they make their way to women throughout the camp.

As they cook on open fires, wildfire is always a risk in the camps and lack of access to cell phones means calling 911 can take time. Karin is working with local companies to source and donate recycled fire extinguishers to protect both the homeless community and surrounding neighborhoods. “This doesn’t just help the homeless,” she said, “It helps the whole community.”

Wildfires have become a concern for communities across the western United States this week as lightning strikes and hot weather fuel blazes. This steady intensification of fire season is propelled by climate change and dryer and hotter weather is becoming the new year round reality for many states. Halting climate change requires many nodes of action, but one big tool is protecting the rainforest. This is the mission of our second featured Emissary, Douglas McMeekin. 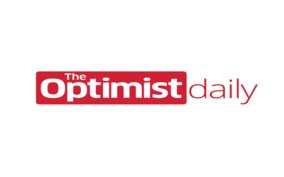 A native of Lexington, Kentucky, Douglas has called the rural jungle of Ecuador home for the past 30 years. Living near the Napo River in the Amazon, he started his work in South America by building schools and doing teacher training, combining education and conservation into one curriculum. After starting the Yachana Foundation in 1991, he has worked diligently with indigenous groups to make saving the rainforest his life’s work.

The Foundation owns 1000 hectares of protected land and operates an ecotourism lodge to encourage travelers to advocate for rainforest preservation. 35 kilometers above his property lies the Sumaco National Park, a designated UNESCO man and biosphere reserve. The land between these two areas is dotted with indigenous territories and private farms. Douglas realized if he could collaborate with indigenous groups to buy these farms and turn them into protected areas, they could create a vast corridor to connect the two regions and greatly expand the amount of protected rainforest.

At 78 years old, Douglas recognizes that taking on a new project this big is unconventional, but he’s dedicated to the cause. Looking at the land owned by the Foundation, he hatched an unconventional and innovative plan.

Douglas asked himself, “How can we take what we have and not just protect it but use it as that catalyst to allow us to protect a whole lot more land?”

The result is a buy-in conservation program called Footprint For Life. Yachana will sell off 100 square meter areas of their land to individuals who want to “sponsor” a protected area of the rainforest. Much like other programs which allow you to sponsor an endangered animal or buy and name a star, the square will remain a protected territory, but it will technically be owned by someone anywhere in the world passionate about saving the rainforest. 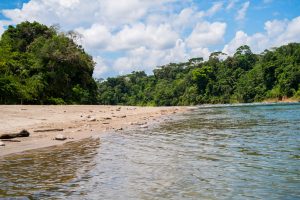 Plots are $50 and buyers will even get the GPS coordinates of their little square. Next, the money from these sponsorships will go towards buying land from farmers nearby to merge the protected regions. The carbon footprint of the average human in the United States is 16.5 tons of carbon per year. It takes seven of Yachana’s “blocks” to offset one’s carbon emissions for one year.

When considering the effects of a warming climate, this “corridor” is even more imperative as species migrate up the mountain range in search of cooler temperatures. The “corridor” will serve as a biodiversity highway for species seeking safe passage to the cooler Sumaco National Park. Given that the Amazon has some of the highest biodiversities of anywhere on the planet, this corridor could be saving species we have yet to even discover.

From where Douglas lives, it takes two miles on rough roads to reach the nearest town. I asked him what made it all worth it. After all, living in the Amazonian jungle for 30 years is no easy task. Even amenities like the internet are not always reliable. I was ecstatic when we successfully connected over video chat as he warned me that we might have to try several times to get a full connection.

His response: “I have tremendous respect and love for the local people. They’re my family.”

Laughing, Douglas also referenced our many articles about the many health benefits of being surrounded by trees: “I’ve got a lot of trees around me.”

We all want to change the world for the better, but often the most profound legacies we leave start right at home in our own communities. As Karin and Douglas have demonstrated, all it takes is a passion for good and a tremendous amount of drive.

We love sharing solutions with our Emissaries and we are increasingly inspired with the ones you send us! Karin and Douglas are just two examples of a myriad of Emissaries working every day to uplift their communities with solutions and determination. We will continue to follow their amazing work and encourage all our readers to send us the solutions and initiatives at work in their own backyards at solutions@optimistdaily.com.

Amelia Buckley is a staff writer for the Optimist Daily based in Santa Barbara, CA. As a global studies major and lover of the outdoors, Amelia is passionate about crafting stories that focus on critical global issues that impact our environment and natural spaces.

At The Optimist Daily, we often feature stories about scientific discoveries that help improve our understanding of the biosphere. We ... Read More

10 Tips to prevent food waste in your...

Growing your own food is hard work—don’t let all that work go to waste. Here are 10 strategies to help ... Read More

6 In-season superfoods to add to your...

As we head into the fall season, many of us are looking forward to changing leaves and cooler weather, but ... Read More

This AI system is designed to protect...

The US is home to more than 40 species of bats, but habitat loss, climate change, and disease have taken ... Read More

Ancient footprints could be earliest ...

How to avoid the three most common fa...

Fall is the season of beautiful leaves and cozy soups, but what might not be so pleasant is your fall ... Read More