Soil erosion is a huge problem for small-scale farmers. Here’s a brilliant fix

Soil erosion is a huge problem for small-scale farmers. Here’s a brilliant fix 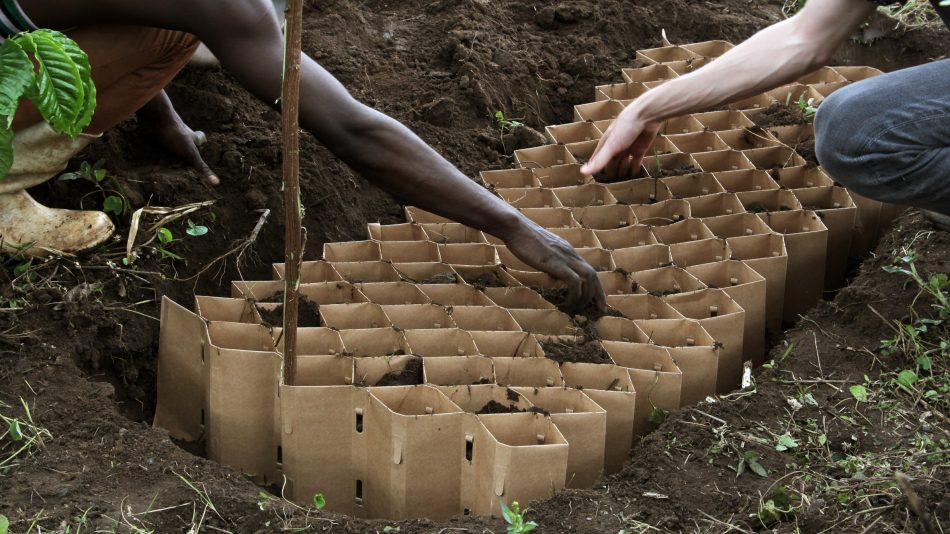 Soil erosion is a vicious cycle, one that is being exacerbated by climate changes as long periods of drought followed by brief, torrential rainfall mean that fertile topsoil and seeds are flushed away before they get a chance to germinate. This leads to a lack of vegetation, which in turn makes it even harder for water to penetrate into the baked soil in the future.

To help small-scale farmers grow food even in degraded soil, Dutch designer Thom Bindels has created honeycomb-shaped cardboard frames that prevent the runoff of seeds and nutrients in rainwater. The simple, modular, cardboard system can be embedded in a slope of degraded earth and filled with local soil. Then, with time, the cardboard system degrades, and when it does it will grow a strip of “perennial terracing vegetation” because the cardboard is enriched with seeds and nutrients.

The resulting terraced crops fulfill the same stabilizing function the cardboard originally served. In between these organic fortifications, food crops are protected from erosion and able to flourish. Brilliant!

The modular system, which has been dubbed Ecokick, has been testing the product on-site in Uganda for two years to develop the prototypes. Eventually, the Dutch designer wants to create a simple, low-tech production line so that the product can be made locally, anywhere in the world. That way, Ecokick can help fix soil erosion around the world while eliminating the carbon emissions associated with transporting the product.