How an Oscar-nominated documentary illustrates the power of resilience

Wild honey smells of freedom. The dust – of sunlight. The mouth of a young girl, like a violet. But gold – smells of nothing. -Anna Akhmatova

Our first introduction to Hatidze Muratova is watching her navigate a steep cliff towards a jagged rock face. She carefully pries rock away from the cliff side to reveal a swarm of bees. Her actions are meticulous and her honey cultivation is solitary, but Tamara Kotevska and Ljubomir Stefanov’s Oscar nominated documentary, Honeyland, illustrates her journey of perseverance for the whole world to see.

In the face of rising controversy about the Oscars and appreciating diverse cinematography and actors, this narrative of resilience and ecological harmony stands out as a shining example of film’s capacity to capture and share powerful and educational stories with the world.

This compelling documentary does more than teach the viewer about the careful process of traditional honey cultivation, it also powerfully conveys the challenges of daily life in rural Macedonia. 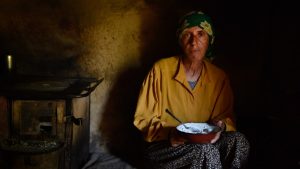 Hatidze’s new neighbors, a chaotic nomadic family, move in with seven children and not a moment of silence.

The juxtaposition of their “get-quick” economic schemes with Hatidze’s meticulous indigenous honey cultivation is a sometimes infuriating lesson on the importance of dedication and the value of doing things right.

Hatidze foreshadows the two family’s different economic ideologies with a marketplace anecdote. She ventures to a nearby city to sell her honey and explains that some people cut their honey with sugar to make it sweeter, but hers is raw and of the highest quality. 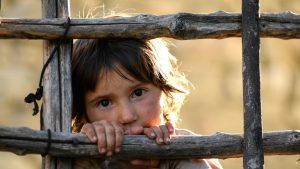 At first she maintains a working relationship with the family. She sings with the young children and they show her how to use a primitive radio to listen to weather reports. During her long days of carefully storing sheets of honeycomb behind rock panels in her backyard, she finds time to play with the children, enjoy fireside conversations with their parents, and even gift one young girl a kitten. Their initial interactions are a testament to human cooperation even between wildly different families.

However, when Hatidze explains to Hussein and Ljutvie Sam how much money she makes from honey sales, they promptly invest in their own bee boxes and begin the process of cultivating their own honey, not in the traditional way she does it, but on a larger, farmed scale. It is a micro example of how large scale agriculture can be unsustainable and non-regenerative.

Small, day to day images of their adjacent lives illustrate the differences in ideals between the two families. As Hatidze gently peels away rock to reveal layers of saturated honeycomb, she wears only a thin screen over her face or no protection at all. She collaborates with the insects in her custody. In contrast, her neighbors are stung repeatedly as they aggressively extract dry honeycomb and ward away swarms of bees with smoke.

The two distinct approaches to one’s relationship with the natural world and how we extract resources from it tells the story of a much broader, continuous story we are telling on a global scale.

Living in harmony with the earth 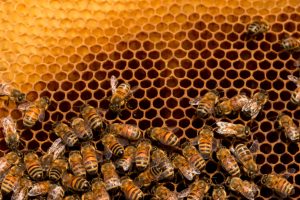 The Nagoya Protocol – a United Nations Convention on Biological Diversity (CBD), was established in 1993 and aims to regulate the relationship between humans and the natural world. It established guidelines of balance between providers of resources such as plants, animals, and the earth with takers: humans. Honeyland vividly depicts the varying attitudes towards the earth and the contrast between taking from nature and living in harmony with the earth.

Half for me, half for you

Things quickly sour with her new neighbors. Hatidze explains that they must leave at least half of the honeycomb in the 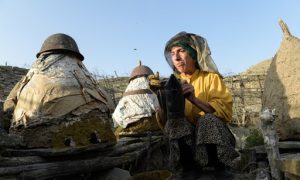 boxes, or the bees will not have enough to survive on themselves, but when a local businessman pressures Hussein into collecting all of it, he manages to kill not only his own bees, but Hatidze’s as well, damaging her livelihood. This heartbreaking moment shows us the reality that if we take too much from the earth, it will have nothing to give future generations. The invaluable contribution of nature to human life is expressed in her words:

“A village without a river is no village at all.”

Hatidze’s new neighbors eventually venture onward. The seasons change from fall to winter and she is once again alone in her small abode. Even in the wake of destruction and conflict, she once again returns to the cliffside where we began our journey with her and tends to her bees. Her resilience and determination to cultivate properly and sustainably, even if it takes longer, withstands many tests over the course of the film.

Her commitment to a positive attitude is almost more impressive than her commitment to her insects. Even in the face of loss and disrespect, she rarely loses her temper or composure. She maintains a kindness towards the children that live next door and even teaches one of the young sons the ways of traditional beekeeping. This small act gives the viewer hope that her trade will be carried on by the subsequent generation. 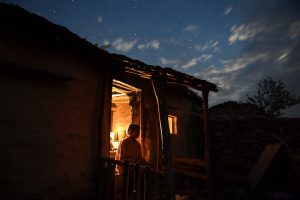 Once her neighbors move onwards, the cyclical ways of nature once again take over Hatidze’s lfie. The viewer watches almost with relief as her world is once again shrouded in silence, save the buzzing of her carefully tended bees. She gently collects one sheet of honeycomb, the snow falls, she collects enough firewood to keep her and her pet cat warm, and life continues on with her living delicately folded into the earth’s natural ebb and flow. I found myself breathing a surprising sigh of gratification at a return to such simple daily routines.

The gorgeous cinematography, filmed over three years, is not the only factor that won Honeyland so many awards this year. Directors Tamara Kotevska and Ljubomir Stefanov beautifully explain why Hatidze’s journey connects on a fundamental level with such diverse audiences:

“Hatidze’s story is a microcosm for a wider idea of how closely intertwined nature and humanity are, and how much we stand to lose if we ignore this fundamental connection.”

While the challenges she faces are sometimes difficult to watch as a viewer, the storyline reinforces the importance of commitment to what one knows is right and strength in the face of adversity and loneliness. The real legacy of the film is not how to make honey, but the value of resilience and a buoyant spirit.

Amelia Buckley is a staff writer for the Optimist Daily and pursuing her undergraduate degree at the University of California, Santa Barbara. As a global studies major and lover of the outdoors, Amelia is passionate about crafting stories that focus on critical global issues that impact our environment and natural spaces.

At The Optimist Daily, we often feature stories about scientific discoveries that help improve our understanding of the biosphere. We ... Read More

10 Tips to prevent food waste in your...

Growing your own food is hard work—don’t let all that work go to waste. Here are 10 strategies to help ... Read More

6 In-season superfoods to add to your...

As we head into the fall season, many of us are looking forward to changing leaves and cooler weather, but ... Read More

This AI system is designed to protect...

The US is home to more than 40 species of bats, but habitat loss, climate change, and disease have taken ... Read More

Ancient footprints could be earliest ...

How to avoid the three most common fa...

Fall is the season of beautiful leaves and cozy soups, but what might not be so pleasant is your fall ... Read More