“Daily, our eating turns nature into culture, transforming the body of the world into our bodies and minds.” – Michael Pollan

What do you picture when you hear the word halophyte? No, it’s not an obscure insect or the name of Elon Musk’s new futuristic car. Halophyte literally means “salt plant” and it could be the key to saving humanity from a crippling food crisis.

Before we dive into the science of these wonder plants, let’s cover some background. Only about three percent of Earth’s water is fresh drinking water, and this percentage is shrinking with pollution and salinization. Additionally, 44 percent of available land is considered “wastelands,” or deserts which cannot support traditional agricultural methods. So how can we feed a growing population using old practices reliant on dwindling resources? The short answer is we can’t. 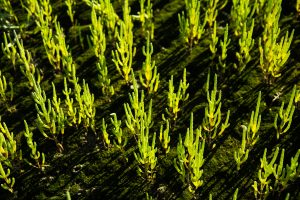 The key to feeding future generations is not from increasing our current agricultural practices, but through leveraging new food resources that thrive in difficult, emerging environments. Seta Tutundjian, Director of Programs for the International Center for Biosaline Agriculture (ICBA) notes that of the 30,000 possible crops we could eat, we are cultivating only 150. Halophytes play a critical role in diversifying our food sources for long term food security.

Halophytes offer an innovative new frontier in agriculture which requires less freshwater and is less resource intensive. These plants thrive in higher salinity environments and produce high yield biomass. They also offer immense food diversity. There are 10,000 known halophytes and that number is only growing with research.

So what exactly are these plants?

According to the Biosalinity Awareness Project,

“Halophytes are generally defined as rooted seed-bearing plants (i.e. grasses, succulents, herbs, shrubs, and trees) that grow in a wide variety of saline habitats from coastal sand dunes, salt marshes and mudflats to inland deserts, salt flats and steppes. These highly adaptable plants, which can accrue relatively large amounts of salt, are found in every climatic zone where there is vegetation, from the tropics to tundra. A slightly more refined classification of these salt-tolerant plants differentiates between hydro-halophytes that grow in brackish/saline wetlands and xero-halophytes that are particularly well-suited to deserts and other low-moisture environments.”

Halophytes are actually more prolific than you may know. Common halophytes include quinoa, mustard, and safflower. Astertripolium (a.k.a Sea Aster or Sea Spinach) and Salicornia bigelovii (a.k.a. Glasswort) are also well known successful food-producing halophytes. Euphorbia tirucalli (a.k.a. pencil tree) is a highly economical plant in East Africa, known to be naturally adapted to salt and drought conditions with a high water use efficiency.

Tutundjian remarks that quinoa is incredibly versatile and effective for crop diversification. Not only can the plant withstand high salinity, but this grain also has over 6,000 genotypes and is highly water conscious. She says, “to produce optimum quinoa production you need less water than wheat, maize, or barley would to even give you a crop.” 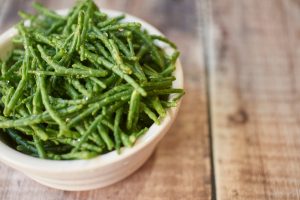 lycium, manilkara, opuntia, and phoenix. Yes, halophyte consumption will take some getting used to in terms of adapting to new unique tastes and textures, but many of these species mirror plants already in our diets. Their uses even go beyond consumption. Some varieties, including Cyamopsis, Grindelia, Parthenium, and Calophyllum can be used to meet household cleaning, food processing, and medicinal needs.

A wide variety of uses

These plants may share common origins in salty growing areas, but their characteristics and applications are wildly diverse.

Salicornia is a halophyte which can be used for biofuel while sesbania, a legume similar to alfalfa, and triticale, a wheat-rye hybrid, serve as excellent substitutions for some of our most common agricultural staples.

In India, these plants have been called “a treasure” because of the ecological benefits they bring to mangrove populations. Without halophytes to absorb the salt in coastal ecosystems, mangroves would not be able to survive. These mangroves are in turn essential for soil stability which prevents erosion during tropical storms.

Halophytes have already been successfully grown in areas such as the Indian subcontinent and could be planted in the wastelands of Western Australia, the Arabian Sea, the Persian Gulf, the Middle East, the Sahara, Western Texas, and the Atacama. Once established, studies have shown that halophytic crops also have the ability to desalinate and remediate ground and water resources, paving the way for the possible reintroduction of freshwater crops, or glycophytes.

A global agricultural expansion into halophyte crops could also potentially moderate extreme weather events exacerbated by climate change. One example: in July, a massive heat wave originating in the Sahara moved northward through Europe before settling over Greenland, resulting in the loss of 197 billion tons of ice, the equivalent of around 80 million Olympic swimming pools. It should be noted that the westward movement of the warm air mass was highly unusual, running counter to the normal eastward flow due to the powerful heat mass generated in the Sahara. Ask yourself: would the effects have been the same if much of the Sahara were converted from a barren wasteland to halophyte crops that could absorb much of the excess heat instead of allowing it to bounce back into the atmosphere?

The ICBA is taking the lead on halophyte cultivation and introducing it to farmers in the Middle East and Northern Africa as an economically and agriculturally rewarding endeavor. The Center believes these crops could be not only environmentally sound, but profitable for local farmers. Dionyssia Lyra, a halophyte agronomist at ICBA, says the marketing aspect is crucial. The key to getting consumers on board is showing that delicious family recipes can be made with these plants. In rural Egypt, the organization is hosting workshops to teach women about cultivating and cooking with these innovative plants.

Halophytes have started to catch the eye of global entrepreneurs. Canadian startup, Agrisea, is currently zeroing in on developing gene-edited salt-tolerant crops with the goal of soon growing them on floating farms in sea-flooded plains or anchored directly in the ocean.

Thus far, the start-up’s founders are working to grow rice plants in water one-third the salinity of seawater and plan to have small farms floating off the shores of Kenya and Grand Bahama Island by the end of the year.

Scotland-based company, Seawater Solution, takes a different approach. The company takes degraded coastal farmland, seeds it with naturally salt-tolerant herbs, then floods the area by removing seawalls or pumping in water from the ocean to create an artificial salt marsh.

In this new wetland ecosystem, crops grow without fertilizers, pesticides, or freshwater. They also hold soil in place, preventing erosion, and feed on nitrates and carbon, both of which over-accumulate in waters near human populations due to factors like agricultural runoff and CO2 emissions.

To feed the population of the near future, global agricultural productivity must increase by 70 percent. Conventional agricultural methods pollute land and water with over-fertilization and strip away vital nutrients through over planting and monoculture practices that yield less and less while damaging our limited water resources. Pumping more money and chemicals into exhausted agricultural land will not provide the critical food solutions we need.

Halophytes offer an energy and resource-efficient solution to increased agricultural demand. Taking advantage of earth’s salty spaces means taking some of the pressure off our overstrained agricultural lands with an inexpensive and bountiful alternative.

The World Business Academy, the publishing partner of The Optimist Daily, is part of the research team on halophytes. Stay tuned to www.worldbusiness.org for updates on the latest findings on halophytes.

Amelia Buckley is the editorial manager for The Optimist Daily. She holds a BA in Global Studies from UC Santa Barbara and, as a lover of the outdoors, Amelia is passionate about crafting stories that focus on critical global issues that impact our environment and natural spaces. Amelia currently lives and writes from Bozeman, Montana.

Opioid overdoses are on the rise in the US and around the world, and the pandemic has only exacerbated the situation. Addiction treatment, harm reduction, and improved health access are all effective strategies for addressing ... Read More

There are about 12,200 new head and neck cancer cases in the UK every year, and many of these patients are diagnosed at advanced stages when the disease is very difficult to treat. The standard ... Read More

Research has shown that having a dog can help boost our physical and mental health as well as make us feel younger. Pets are an enormous source of joy and comfort, and as dog parents, ... Read More

A recent study led by the Wildlife Conservation Society (WCS) has good news for gorillas. The study found that the number of Grauer’s gorillas, the world’s largest gorilla subspecies, has increased from 6,800 compared to ... Read More

New Zealand is getting an unconventional Covid-19 vaccination clinic in the form of a Boeing 787 plane. The winged vaccination site is being operated by Air New Zealand this weekend as part of the government’s ... Read More